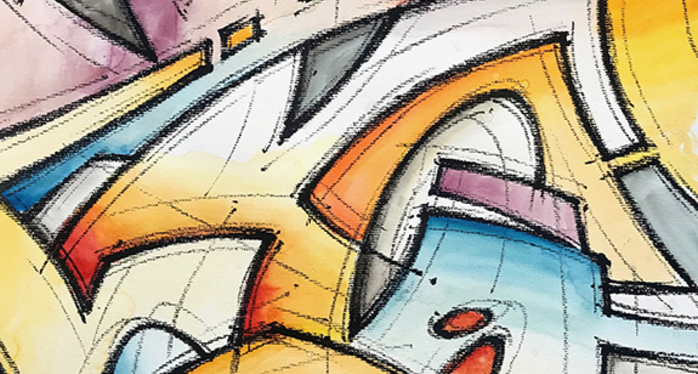 The exhibition "Papers, please!" is an invitation to a selection of artists to express their thoughts. All have the same starting point. A blank paper format. A light and luminous support on which everything is possible. A fascinating diversity of paths and testimonies leads us into a formidable awakening of sensibilities. Nine artists, nine nationalities, nine techniques of expression come together around the same medium to share their positive thoughts and their spirit of freedom.

Alex Kuznetsov / A lifelong art enthusiast and a recognized figure in the world of graffiti, Belarusian artist Alex Kuznetsov has developed his graphic work to the point of abstraction. His precise gestures and vivid colors that he draws with a knife on the paper make fantasized landscapes appear. The blurs give the depth of a horizon and the material of the pigments catches the light. Thus, everyone can project themselves, feel the sensation that echoes his being.

John Crash Matos / John "CRASH" Matos is a pioneer of the graffiti movement. His gallery career began in 1981 in New York. He is one of the emblematic artists of the Speerstra Gallery, which has been working with him since 1984. Bright colors and pop motifs have built his aesthetic. It is with a new energy that Crash has created this new series of works. The immaculate surface of the paper brings out the purity of the artist's gesture. He deploys various tools such as the brush, the spray, the felt-tip pen and the pencil. This essential expression sums up the artist's ambition.

Inocent Kidd / New artist to integrate the Speerstra Gallery, Inocent Kidd is a young Frenchman for whom graffiti is above all a philosophy of life. His singular path leads him to develop a graphic design that he expresses through the practice of tattooing. It is incarcerated in a prison in Colombia that he begins a real practice of the discipline. His know-how earned him the respect of his fellow inmates, whom he tattooed with his drawings. Now incarcerated in France, he maintains his intellectual freedom through his art. He has chosen to illustrate his daily life in a way that is as radical as his living conditions allow.

Mina Hamada / Japanese artist living in Barcelona, she is distinguished by the refinement of her work. Delicate colors and harmonious patterns create the rhythm of a dance to the glory of a nature in perpetual movement. Composed of cold colors declined in shades of blue, and greens degraded as well as warm colors that compose a sunset, the work "Sobre el Mare" makes us travel to a seaside where the horizon that takes shape gives way to the infinite possibilities. The work "Bloom Violette" deploys a gradient palette ranging from deep blue to pastel purple. An abundance of curves and plant silhouettes spread out gently on the paper, inciting contemplation.

Mist / Since his first participation in the exhibition "Graffiti Art" at the National Museum of French Monuments in Paris in 1991, Mist has never stopped maintaining a hellish style whose identity he draws from the graphic codes of graffiti. The evolution of his work goes through a permanent research of mastery of formats, supports, techniques and tools. For this new series, accumulation is at the center of his reflection. Superimpositions and perfectly executed compositions are highlighted by a range of energetic colors whose gradations are wisely contained by a multitude of black lines. M as in mastery, I as in institution, S as in spontaneous, and T as in technique, MIST is audaciously powerful.

Sozyone / Spanish artist, repeats with a creative process that he loves. The technique of collage has allowed him to create portraits of men and women, whose stories have a particular resonance for the artist. With this new series, Sozyone has chosen the gesture of tearing to highlight the characters of his icons. Some of the chosen pieces are taken from newspapers of the last century, as if to remember. The future, Sozyone builds it thanks to the experiences of the past. He thus pays tribute to the paths and battles led by others. A careful juxtaposition of torn paper is organized in different shades of color and patterns chosen to illustrate the material of the work entitled "I saw the world and it is not beautiful. The outlines of this work define the portrait of Marius Jacob, a typographer anarchist whose ideas and struggles influenced the Sozyone philosopher.

Stohead / A key artist at Speerstra Gallery, Stohead has made his mark by cultivating the impact of his work. Calligraphy, colors and messages are the essential elements of his universe. For this new series, Stohead has chosen to illustrate three words, three attitudes of these new times. It is on a black paper that Stohead has chosen to intervene. With a radical and precise gesture, he slides his tool soaked in paint, taking care that the material can flow and give rhythm to the format. The gradation of colors unfolds, going from topaz blue, to a luminous gold. The letters seem to be cut out of a landscape at the dawn of a new day. The words he chose to illustrate are states of mind that accompany us a little each day. Unusually, Timeless, and Vivacious are like promises made to change our lives.

Swox / Coming from graffiti, Swox has evolved his work towards pure lines and volume effects of the material. Little by little, his letters have become abstract, his words have become sensations. For the exhibition "Papers, please!", Swox has chosen a selection of works where textures impose themselves in rhythm and contrast. The patterns play the game of radicality while the colors are often invested with nuance and transparency. His elegant applications of large brushes and his aerosol interventions create a fusion whose modern aesthetic brings a surprising dynamism.

Xavier Magaldi / Resolutely turned towards the movement "MecaFuturism", Xavier Magaldi is already turned towards the future of our lives. He declines his works to infinity, going so far as to create a real creative workshop in the world of the metaverse. The works presented for this exhibition show the artist's journey between the real and virtual worlds. He has chosen to illustrate the details of one of his sculptures with shades of metallic colors with mineral tones, textures and sharp graphics. The depth of his works is attached to a specific work of surface rendering. These proposals of real materials can be chosen to modify the appearance of his NFT works in the virtual world. The result of his work is a true technical and avant-garde performance. 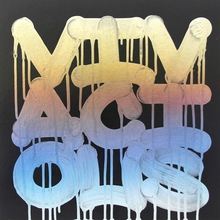 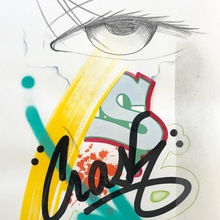 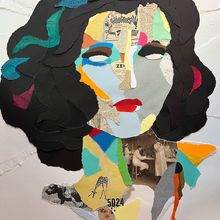 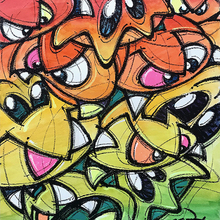 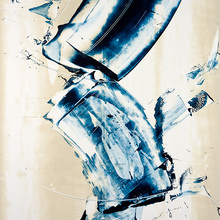 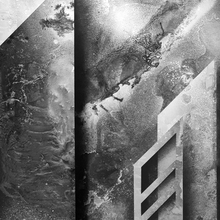 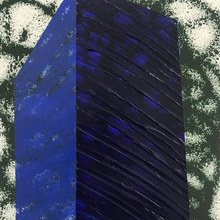 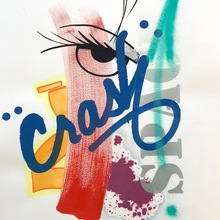 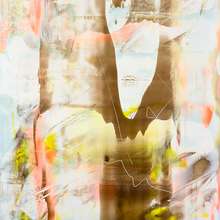 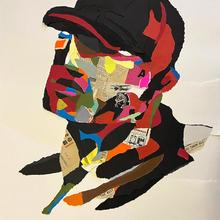 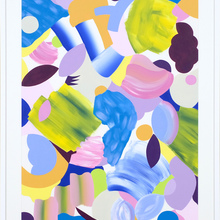 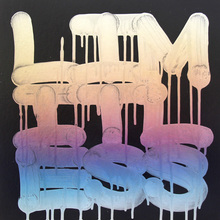