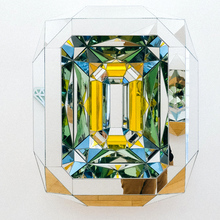 Le Diamantaire was born in Caen in 1987. It is the discovery of the work "André the Giant Has a Posse" of Obey in 2001 which initiates its step to use the street as ground of expression. He then launched into graffiti and quickly saturated all the walls of his hometown with his art. These multiple representations end up earning him a ban on graffiti. Far from abandoning the idea of exposing his creativity to the greatest number of people, he starts to work with stencils. This technique meets the desire for an artistic expression that is more figurative, accessible and striking. At the same time, his studies in metalwork and then boiler making trained him in shaping and introduced him to techniques that gradually nourished his creativity and know-how.

Always driven by the desire to better master the art of conveying messages, the Diamond artist moved to Paris in 2008 and trained in visual communication. Like artists like Invader, Zevs or Gilbert with strong identities, the artist opts for a strong symbol, that of the diamond.

In a context where street art is flourishing, Diamantaire distinguishes himself by the choice of the mirror as a material to decorate the walls. The mirror used by the artist is recovered from the street and then recycled in the form of two-dimensional diamonds. Each work is then painted and numbered. The first walls dotted with these street jewels are first those of the French capital in 2011. Today, these colorful jewels are delivered to the largest cities in the world such as New York, Montreal, Los Angeles, Miami or Zurich. Beyond the aesthetic value of these works, it is to convey a message. The diamond, a strong symbol of luxury, associated with rarity and exclusivity is offered to the passer-by through art. Creativity is at the service of the street.

From 2012, Le Diamantaire evolves his street work towards gallery art and participates in several group exhibitions in Paris and Zurich. One year later he realizes his first solo exhibition Atelier, at the Derouillon gallery in Paris (3rd). This event allows him to explore different techniques such as engraving, but also to use other materials such as wood and metal. The year 2013 is also the year when the Diamond maker leaves for Los Angeles to join Kaï Aspire, a street artist friend he met during an exhibition in Zurich. In addition to decorating the walls of his diamonds, he realizes during his stay a monumental mural on Melrose Avenue.

The year 2014 marks a turning point in the career of the Diamantaire. His work is sponsored by a patron, who puts at his disposal a huge 900 m2 workshop. This workspace, mixed with the large number of machines and tools, gives him the material means to fully express his creativity. He produced large-scale pieces such as his 4000, a monumental steel work measuring four meters by four. This piece, created for a street art festival in the Paris suburbs, marks the transition of the artist's work from two to three dimensions.
The same year, Le Diamantaire travels to Montreal to honor the invitation of the Station 16 gallery to participate in the MURAL festival in June. Seduced by the artist's work, the gallery later offered him a solo exhibition; street art from Paris. On his return to France, he realized a series of 10 pieces that will be exhibited at the Wide Painting gallery in Paris (5th) as well as at MISS KO - the last Parisian restaurant designed by Phillipe Starck. The works presented, all very different from each other but always on the theme of the diamond, illustrate the passage from street artist to contemporary artist.

At the beginning of 2015, Le Diamantaire exhibited in duo with Zoé Byland at the Trace Gallery in Zürich. The works presented by the artist during this exhibition called Monochrome, display a more assertive style. The symbol of the diamond is represented in volume and from different angles. The Diamantoscope, a piece halfway between the kaleidoscope and the spyglass, perfectly illustrates the artistic evolution of the Diamantaire. In the spring of 2015, he initiated a colossal work to create a six meter by six meter ground steel diamond whose weight exceeds one ton.
The end of 2015 is marked by his exhibition Diamonds are forever II at the Wide Painting gallery in Paris (5th). Open to the public since October 8, 2015 until mid-December, this exhibition appears as an aesthetic achievement that shows the infinity and depth of the diamond. The perspectives are multiplied, and offer a multitude of reflections but also of points of view. The works can be admired from all sides; from the side or from above, as one would admire the top of a jewel. The artist even proposes a more abstract vision of the gemstone, through his Hypercube piece from which he has removed certain faces to obtain a polygonal shape.

Once again, Le Diamantaire shows the richness of his creativity and his artistic and conceptual work in perpetual evolution. 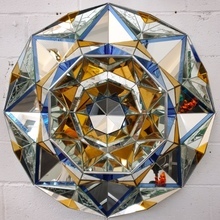 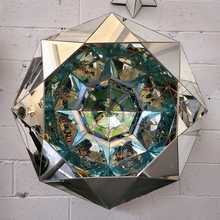 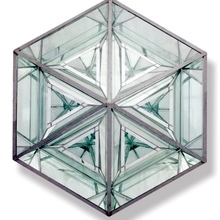 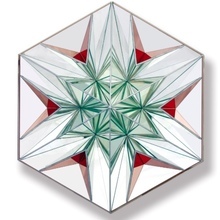