About Graffiti and Street Art

The phenomenon, which can be observed all over the world today, is called Graffiti Art. It all started in Philadelphia, Pennsylvania on the turn of the late 60's with writers like Cornbread and Cool Earl. The movement took on very quickly in New York City and names and nicknames started to appear on buildings, post-boxes, phone boxes, underground tunnels, buses and finally on subway cars. Taki 183, whose name was to be seen all over NY, gave an interview to The New York Times in 1971. Taki’s real name was Demetrius, 183 is the number of the street where he lived. This young greek boy wrote his name almost everywhere during his work hours as a messenger. Other well known writers from that period were: Joe 136, Barbara and Eva 62, Eel 159, Yank 135, Julio 204, Frank 207… 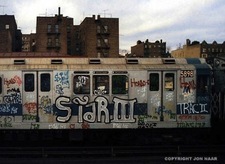 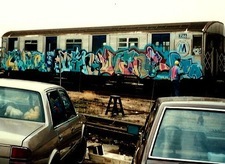 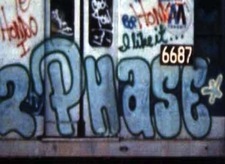 Hip-hop culture in the US and in Europe

Henry Chalfant and Martha Cooper book "Subway Art" quickly became the bible of graffiti art for the young writers and b-boys from Los Angeles to Amsterdam. By 1987, Chalfant second book “Spraycan art” documented the movement on walls across the world. By the late 80’s, the European scene was long established and in full force. Writers from both continents were now meeting up regularly and exchanging information through black books and photos of their work on trains and walls. The biggest artistic movement of all times was now born and kids from all around are still painting aerosol art today. 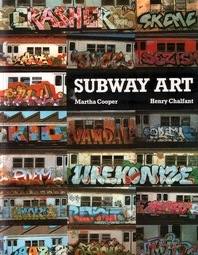 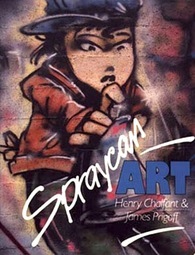 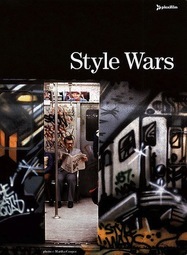 By 1973, writing moved from the streets to the subway cars and quickly became competitive. At this point writing consists of mostly “getting (your name) up”. Writers would hit as many cars as possible, tagging inside the trains while it rides station to station. It wasn't long before they discover that many more subway cars could be done inside the train yard with more time to paint and less chance of getting caught. The concept and method of bombing are now established. Every line has its King. A king is a writer whose pieces are the most visible, biggest and most beautiful. Kings are respected by other writers who sometimes ask them to help paint pieces at night. 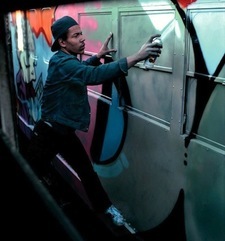 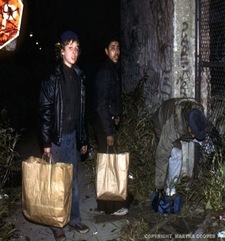 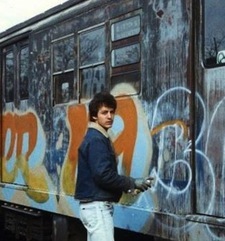 In 1975 all the standards has been set. A new school was about to reap the benefits of the artistic foundations established by prior generations in a city in the midst of a financial crisis. New York City was broke, therefore the transit system was poorly maintained. This led to the heaviest bombing in history.

Writers began to increase the thickness of the letters and would also outline them with an additional colour. Caps from other aerosol products could provide a larger width of spray, leading to the development of the masterpiece. It is difficult to say who did the first masterpiece, it is commonly credited to Super Kool 223 of the Bronx and Wap of Brooklyn. The thicker letters provides the opportunity to enhance further the name. Writers decorate the interior of the letters with what are termed "designs." First with simple dots, later with crosshatches, stars, checkerboards. Designs are limited only by an artist's imagination. Many different styles could be seen on the subways cars: illustrations and cartoon characters were used to illustrate the letters. Every style has its name: top-to-bottom, block letters, block busters, panel pieces, leaning letters, window down, whole car, throw ups… For example the Bubble style was invented by Phase II. A more complex development of the letter design turns the piece totally unreadable to the average commuter. Writers call it “wildstyle”. 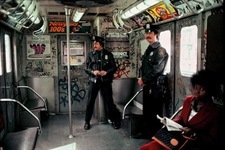 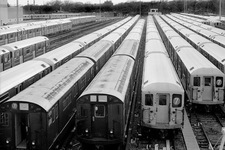 Subway trains were not easy to paint in the yards were they would park at night. The artists had to face many risks, from the electrified third rail to being chased by the Transit Police's Vandal Squad. All of this would not stop the most hardcore writers from expressing themselves and risk their live every time they would go out painting. Respect is due to all early and late graffiti writers form NY and the rest of the world for continuing to spray the ongoing history of graffiti.

Between 1970 and 1985 the Metropolitan Transit Authorities spent between 100 and 150 millions dollars to remove graffiti from its network, unsuccessfully. For example, the removing of one quadrate meter costs about 750 dollars, a whole car is 78 000 dollars, using high pressure water with specific chemistry (the 'buff'). Graffiti artist Blade lost from 1978 hundreds of his whole cars. 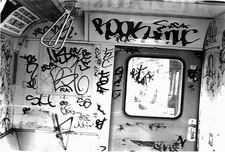 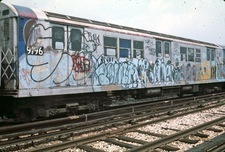 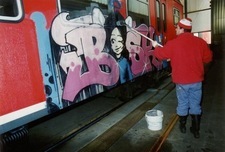 The buffing system didn't work as expected on the oldest cars called 'coffins' (built in the 50's) and on later “flat trains”. Only parts of the graffiti were removed as the rest exposed the steel to rust. The “coffins” trains were dirtier than ever.

At the end of the train era, New York writers had to switch targets. Many has turned their interest to murals while the train scene continued his way in Europe. If graffiti can still be observed on Copenhagen or german subway trains, it also found his way to some city councils. Many cities organise Hip hop events where writers are invited to paint sophisticated pieces on walls. The New York Tats Cru (Nicer, Bio, Just 195, Nosm…) the Mac Crew (Juan, Kongo, Alex…) and the GrimTeam (Chaze, Soda, Dize, Pro…) from Paris have become professional muralists.

At the Kosmopolite festival in Bagnolet near Paris, old school writers from New York paint murals with younger european generations. From Marc-Aurèle Vecchione “Writers” to the “Trumac”, thru “Dirty Hands” or “Wild War”, a wide range of videos relate the different tendencies of the new scenes to the public.

The interest in showing graffiti on canvas has developed as soon as graffiti sprayed in the city. In 1972, Hugo Martinez, sociology major at City College in New York took notice of the legitimate artistic potential of the early graffiti writers generation. United Graffiti Artists and Martinez selected top subway artists from all around the city and presented their work in the formal context of an art gallery. UGA provided opportunities once inaccessible to these artists. The Razor Gallery was a successful effort of H. Martinez and the artists he represented: Phase 2, Mico, Coco 144, Pistol, Flint 707, Bama, Snake, and Stitch 1. A 1973 article in New York magazine by Richard Goldstein entitled "The Graffiti Hit Parade" was also early public recognition of the artistic potential of subway artists.

In the early 80’s in NY, Art galleries like Fashion Moda, Patti Astor's Fun Gallery and a little later on Sydney Janis started to show graffiti works on canvas to expand their horizons. These and subsequent galleries would prove to be an important factors in expanding writing overseas. European art dealers became aware of the movement and were very receptive to the new art form. Shows featuring paintings by Dondi White, Lee, Zephyr, Lady Pink, Daze, Futura 2000, Crash, Rammellzee.

In Holland the exhibitions of theirs artworks in the Boymans -van Beuningen Museum in Rotterdam (1983) and the Groninger Museum in 1992 “Coming from the Subway” were an unbelievable success. Art critics and collectors talked in positively ways about their artworks, these events had deep meaning for development and promotion of aerosol art in Europe. Today’s Old school artists are recognized by the institutions, Contemporary Museums owning Post Graffiti works in their collection. Their paintings and sculptures are today being sold through auction sales and fine art galleries around the world.

Today, we travel through city streets all over the world to explore street art, a popular and lively art movement. Street art can be found on buildings, sidewalks, street signs and even trashcans from Tokyo to Paris to New York City. This special kind of art can take the form of paintings, sculptures, cloth or even stickers. Its international presence is supported by Web sites, artist communities, books and magazines. Street art has become part of a global visual culture. Now, even art museums and galleries are collecting the work of street artists.

Street art today takes many forms. One well known New York City street artist goes by the name of Swoon. Swoon creates detailed paper cutouts of people that she observes around her. She places these life-size images on walls in different areas of New York. For example, one of her artworks is of a little boy playing. He is turning his smiling face and seems to be running into the distance. The lines of Swoon’s drawing give energy and movement to the picture. 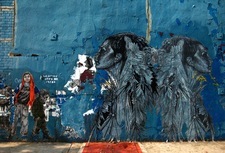 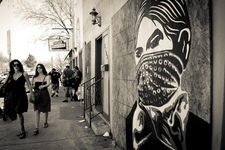 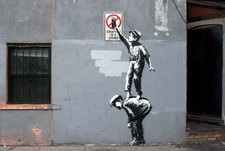 In Philadelphie, Pennsylvania, CORNBREAD et COOL EARL spray paint there names all around the city. 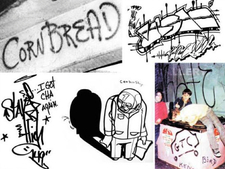 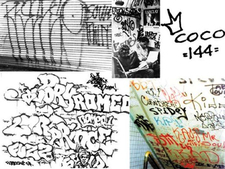 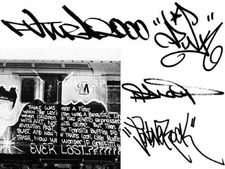 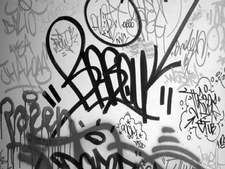 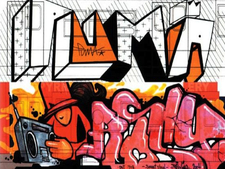 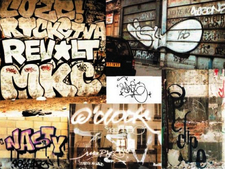